Three Austin firefighters barreled into a burning condominium Sunday morning when they heard reports that a resident was trapped inside.

The resident was out of town, but the firefighters did not realize that before the second floor collapsed beneath their feet and they fell to the first floor, according to Austin Fire Department Battalion Chief Palmer Buck. 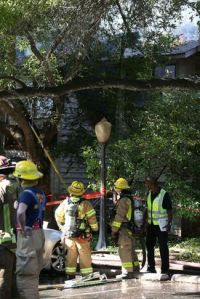 Lt. Jeremy Burke and Willie Cook, 16-year veteran firefighters, were able to escape, but Jimmy Casares, a four-year veteran, was trapped under the burning rubble for about 15 minutes. Crews rescued Casares, and the three men were transported to University Medical Center Brackenridge with second-degree burns, mostly to their lower extremities.

Casares was later transported to the burn unit in the San Antonio Military Medical Center and is expected to be there for at least a week. Burke was released from UMC Brackenridge on Sunday, and Cook was scheduled to stay at the hospital overnight due to smoke inhalation.

“They are in good spirits and well taken care of,” Buck said.

Twenty to 30 residents were displaced in the three-alarm fire at the Dry Creek West Condominiums on Dry Creek Drive in Northwest Austin, Buck said, but there were no civilian injuries.

A police officer was also sent to the hospital after suffering smoke inhalation as he attempted to rescue residents, Buck said.

If there had not been reports of somebody trapped inside, he said, the fire might have been handled differently.

“We say it all the time — risk a little to save a little. But the flip side of that is risk a lot to save a lot,” he said. “We’re going to put our firefighters in danger when there is a report of somebody in trouble.”

All three had been on duty since noon Saturday and were working out of the station house at RM 2222 and Loop 360.

The initial 911 call about 7:30 a.m. reported that a transformer nearby might have blown, Buck said. The first units to arrive saw heavy smoke and an active fire. The smoke was visible from just west of downtown.

The crews “were working against time as the fire was quickly spreading from apartment to apartment,” Buck said.

Buck said the cause of the fire remains under investigation.

“We do feel at this point that it was accidental,” he said.

The fire burned through the roof in several places, and smoke was still visible at 10 a.m. Buck said there was $1.5 million in damage to the structure and $500,000 in damage to contents. Ten homes had fire damage, six had smoke and water damage, and four had minor damage.

The displaced residents are being assisted by the American Red Cross, Austin police victim services and others.

Alyssa Absher, who lives in a building at the complex that wasn’t damaged, said she was at home with her 7-month-old son, James, when she heard a series of pops “like a gunshot almost.”

She said she heard sirens but didn’t think anything about it because of her home’s proximity to the busy road.

“Then we came out to see what was going on,” Absher said. “We’re glad everyone is OK.”

Fire and emergency vehicles filled Dry Creek from RM 2222 to Mountainclimb Drive. Buck said about 100 firefighters responded to the fire, or roughly one-third of the force on duty Sunday morning. Crews will remain on fire watch at the condominium through the night.