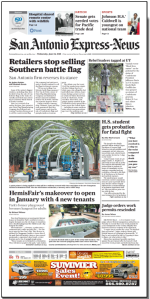 AUSTIN — Hours after University of Texas crews removed red spray paint reading “Black Lives Matter” from a Jefferson Davis monument, the school’s president commissioned a task force to make recommendations about whether to remove the controversial statue.
The prominently displayed monument of the Confederate president has been under renewed scrutiny after a gunman killed nine members of a historic black church in South Carolina last week, prompting a national bipartisan push to remove the Confederate battle flag from the grounds of that state’s capitol.

“We do understand that diversity is one of the key parts of our university culture,” Gregory Vincent, vice president for Diversity and Community Engagement at UT, said at a press conference in front of the Davis statue on Tuesday. “We want to make sure that we strike the right balance and do the right things the right way.”

So far, the university’s Student Government and Graduate Student Assembly have both passed resolutions supporting the removal of the statue.

The statues of Confederate leaders Robert E. Lee and Albert Sidney Johnston were also defaced on the campus just after a vigil held Monday night in honor of the nine people who died in the South Carolina shooting.

According to university spokeswoman Cindy Posey, it will cost the university $500 per statue to remove the paint. This is the fourth incident of vandalism to the Davis statue, and UTPD will begin a new investigation following the most recent vandalism.

According to Vincent, who will chair the task force, there are “no preconceived notions” about what the recommendations will be. UT President Greg Fenves must agree with the recommendations and then it will be sent to the UT Board of Regents for final approval.

The removal of the Davis statue was a prominent campaign platform for Student Government President Xavier Rotnofsky and Vice President Rohit Mandalapu.

“We don’t condone the use of graffiti to get this message across,” Mandalapu said. “At the same time it does show students care about this issue.”

Student leaders met with Fenves on Monday to discuss their concerns.

“I think the administration has been so receptive to working with us on this issue and this could potentially set us back,” Mandalapu said.