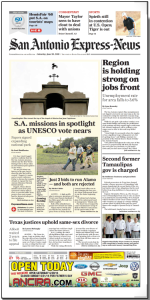 AUSTIN – A high-profile plan to outsource operations of Texas’ most famous landmark has fallen apart after only two bidders applied.

Both of the submitted proposals were deemed not viable.

Alamo Director Becky Dinnin told the San Antonio Express-News on Friday that the General Land Office was instead charging the four-year-old Alamo Endowment Board to run the shrine beginning July 11.

“We always had a backup plan of the endowment board as management,” Dinnin said.

The board was revamped by Land Commissioner George P. Bush in March to raise money for the preservation of the mission. The board includes six big names, including business billionaire Red McCombs and University of Texas Regent Gene Powell, both of San Antonio.

The land office will continue to oversee the Alamo, with the Alamo Endowment board taking over the role of providing daily operations, now performed by the Daughters of the Republic of Texas. The DRT’s last day as operations contractor at the mission and state shrine will be July 10.

But the Alamo may fall into another set of hands after the completion of a joint master plan that will be created by San Antonio and the General Land Office. Only a nonprofit organization may be placed in the management position.

“We had some people who were thinking about it say they would rather wait until the master plan was completed,” Dinnin said.

Recent legislation approved by Gov. Greg Abbott codified the agreement made in April by the city and the General Land Office to create a master plan for the future of the Alamo.

The Alamo’s shift in management is just one of the major changes the mission will see this year.

McCombs, a member of the Alamo Endowment Board, said the board will be tackling how to address concerns that the businesses adjacent to the Alamo diminish the historical importance of the mission.

“We want to be certain that we come the nearest that we possibly can to re-creating the Alamo as it was at the time that that took place,” McCombs said.

The Alamo is the site of an 1836 battle that became the rallying cry for Texas’s fight for independence from Mexico.

Ten amusement and curio shops line the street opposite the Alamo, from the Amazing Mirror Maze on one end to the Tomb Rider 3-D on the other.

The board still has no plans to remove the businesses, but Davis Phillips, CEO of Phillips Entertainment Inc., speculated that the plan may be on the table.

“If we create a space that only the 65-year-old history professor enjoys, it’s going to be a mess,” said Phillips, who operates three businesses adjacent to the Alamo.

Abbott’s approval of House Bill 2968 last week also modified the makeup of an Alamo Preservation Advisory Board, which was put into law in 2011. The preservation board still has yet to meet, and Dinnin said there are still no immediate plans for it to organize.

However, Phillips told a House committee to make certain that a representative from the tourism industry in San Antonio would have a place on the board.

The final legislation made room for a member from the tourism industry and state representatives.

“I feel better that the industry is going to have a voice,” Phillips said.